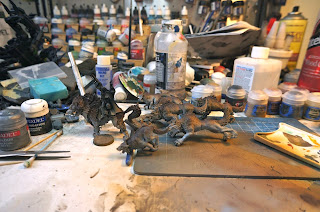 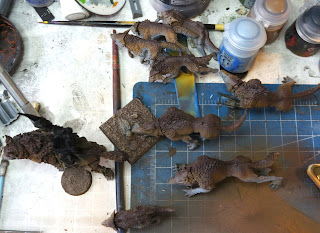 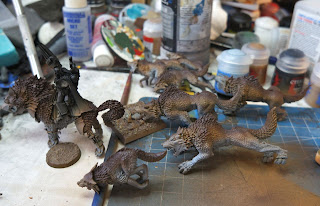 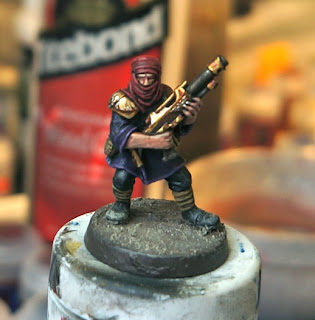 Canis Wolfborn, three thunder wolves, and five of the new wolves are now underway. One of the changes I made from the previous fur recipe was to airbrush fenris grey along the belly,just after the bane blade color. Next, I plan to use a 25% wash 75% water ratio for the agrax earthdirtshadeButReallyIsMud color. I can easily see myself producing an all wolf army for my Space Wolves force. I know it would be terrible from a game perspective, but eh, paint what you want to right.
(a little saturday stream of consciousness should be expected only one coffee in)

Just for kicks I decided to use the new GW painting guide to paint one of the Tallarn models I have been slowly amassing. Instead of going Tallarn traditional, I decided to follow the LoTR Haradim tutorial. I thought it would be just an amusing mash up, but then I noticed my 10 mumaks, and how nice the would look painted like the Haradim elephants and well.....maybe my Tallarn might be LoTR Themed. Do mashups work?

So what are your plans this Saturday? How about painting up a mashup?
Posted by John Stiening at 7:16 AM