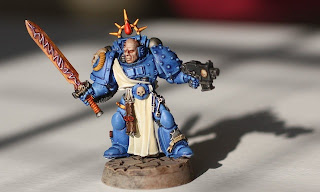 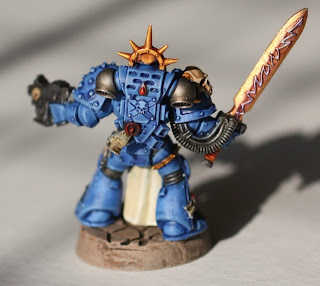 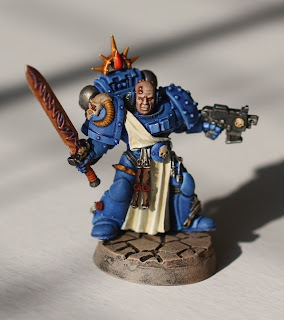 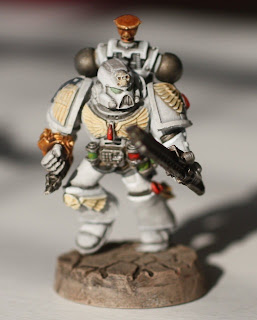 I've been experimenting with washes for a bit now, and tossed these two characters together for my blood angels army. The grey wash worked s0-s0 on the sanguinary priest. I think I have been putting on too many layers at this point. I need to do touch ups and finish painting some of the details, but I was so excited to see these finally in the army I had to take a few shots.
These photos were taken in blindingly bright light this morning, so every imperfection in the paint job shows. I'll take some more later under normal lighting conditions to see if that makes a perceptible difference. The ICs look much better in person, but I guess we read that in email and blogs all the time!
The librarian saw some action yesterday, and I have learned a few things. The whole point of the going to the store was for me to take the Storm Wardens land raider and let it get some air time, hopefully getting a few more people to donate in the mean time. I had no idea I was in store for such a good game. Since I happened to have a freshly minted librarian, I let him get some game time as my HQ choice. Jawaballs has posted about how awesome the libby is. He is right. The psychic hood add a whole new phase to the game that I have never played. It was really nice making mephiston roll off for his powers. My opponent was a heavy into the cult of jawa, and his list was fantastic. I was out mech'd,out-melta'd, and out maneuvered the whole game. His army was also nicely painted, which is so rare at the springfield store.
I want a rematch. (hint---no tanks! :)
Posted by John Stiening at 5:10 AM