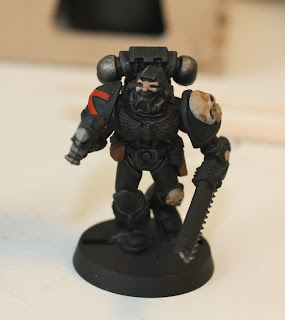 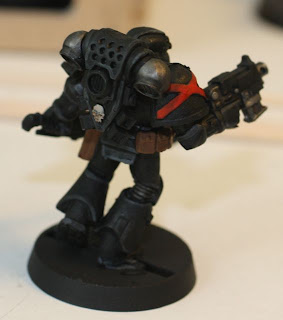 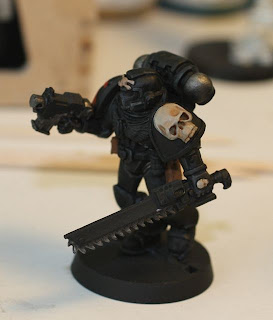 It turns out my advance order is not going to arrive until next week, since I put some items on it that were not released yet. That leaves me plenty of time to learn how to paint black. When I did my ravenwing I used dry brushing as my technique of choice. I am trying to paint these guys up without relying on it. So I started these old swap meet death company marines the same way as my inquisitional and death company rhinos. Then I tried hard lining them. I used too light a gray for this, and had to go back with badab black wash to soften the color. There are a lot of different tonal areas on the mini now, and I am thinking about painting on battle damage. The squad is going to get the same snakebite leather/bleached bone dusting around their legs as the rhino so they will match. I think that will make them stand out more. I plan to mount the minis on an old paint pot and spray at the base rather than their legs proper.
However before I get back to painting today, I have a big game. Tyranids versus Imperial Guard played on the actual amphelion base! My 1750 pt list is tank heavy, with just enough guard to enter the base and get wiped out before a mechanized fighting retreat. I have no doubts my tanks can take the nids, especially since the table is so large, but once inside the base everything changes. I hope we get a few Aliens moments out of this game.
Posted by John Stiening at 7:10 AM