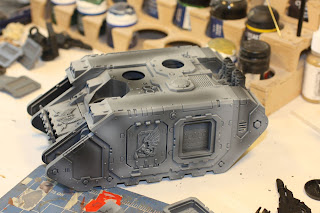 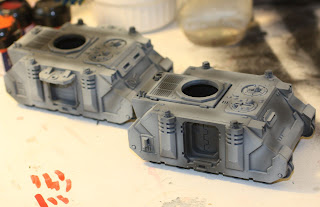 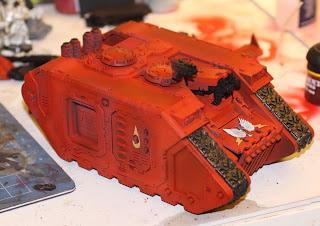 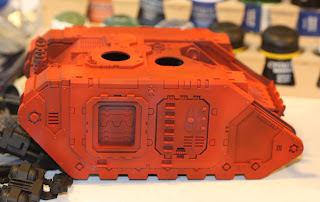 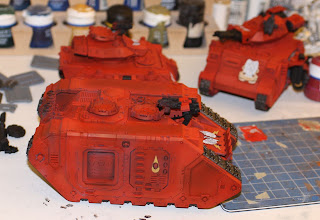 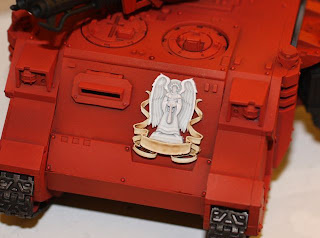 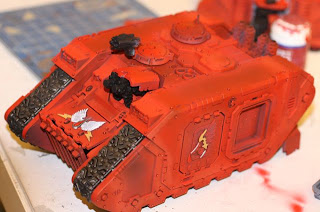 I have a whole slew of tanks being prepped for my new and improved torrent of fire BA army. If you look back at my earlier posts you can see pictures of my old dry brushed beaten up ba tanks. After having so much fun with the airbrush on the Death Company rhino I decided to add two Baal Predators (both magnetized) and a Land Raider God Hammer. The GH is not the most effective tank for my force, but I wanted to paint one so that was that. Behold the power of instant gratification!
I tried two different airbrush techniques on these guys, though they started off the same way. After my earlier attempt using varying base coats I decided to give pre-shading a shot. I base coated all of the tanks black, and then use fortress grey to dust them. At this initial step I had the itch to do a space wolves army. I could see adding some warm brown/yellow panels and battle damage to the tanks after the pre-shading step and being really pleased. However since these were BA, red had to follow.
For the Rhinos
1) Blood Red/ Dark Flesh air brushed on tank
2) Blood red air brushed
3) Blood red/orange air brushed on edges
4) All rivets have baal wash around them followed by orange rivet
For the Land Raider
1) Air brush pure blood red
2) Air brush orange/blood red mix along edges
4) All rivets have baal wash around them followed by orange rivet
It turns out the Land raider recipe was both the easiest and the best looking. That seems to be the pattern for my painting these days. Less work=Nicer produce
In addition to the two preds and the LR, I picked up a vindicator to add to the mix. This should give my regular gaming buddies a pretty hard force to fight. Three Baal preds out flanking, with a convoy of death company in a rhino and assault marines in a LR, supported by a vindicator and drop pod dreds.
Oh on my zeal to get painting I accidentally threw away one of the track segments for the LR, so there is a missing segment on the front!
Posted by John Stiening at 6:11 AM