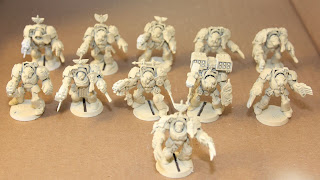 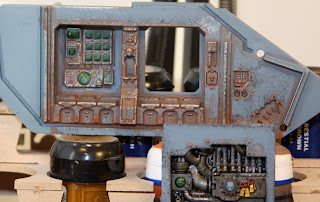 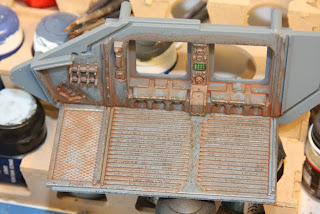 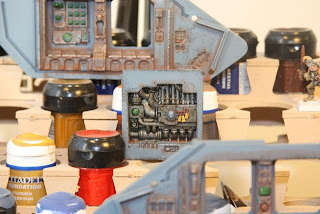 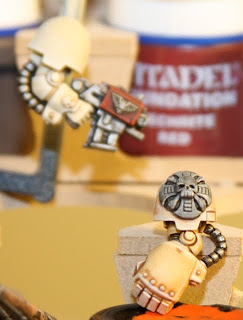 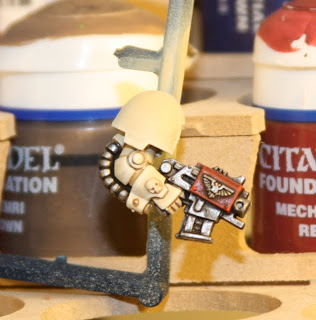 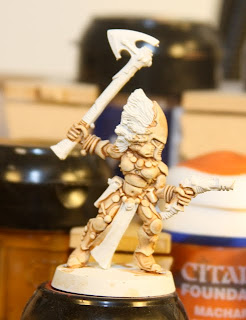 After posting my potential lists last night, and talking to Bill at the local GW store I decided to paint. The list is good enough, and It has so much variety I that I am really looking forward to completing some units and seeing how they turn out. Once Bill said the crusader was a good choice, I knew I had to start painting. Of course, how does one paint bone? For that matter, how is a nice black achieved? As usual this led me to some experiments, which is why you see and eldar model in a DA post.
The first image is my 10 terminators lead by belial. I used a thinned down bleached bone and an air brush to get them base coated. As usual I used white primer. I did get smart this time and use plastic cups with packing tape as stands so I did not totally coat my hands with paint. The base coat is even, but very thin.
How to paint bone?
I posted a while back how to paint my chaos terminators, and decided if they were going to use devlan mud and be dirty, that these not fallen angels would need a cleaner approach. I really like the approach taken by Ron over at FTW, but I am going for a different feeling.
Bone Test 1 Banshee: White undercoat, followed by sepia wash, and then bleached bone to white highlights. I think the banshee looks pretty good, and the recipe is dirt simple.
Bone Test 2 Power Fist Arm: White undercoat, bleached bone base, followed by graveyard earth wash just into the crevices and then a sepia wash all over.
Bone Test 3 Storm Bolter Arm: White undercoat, bleached bone base, followed by a graveyard earth wash carefully placed into the crevices. I then shaded the model with bleached bone up through a 50/50 bone/white color. It does not photography well, but the shading is pretty subtle, and I think battle damage or designs will contrast really well. I think this is my recipe.
Land Raider:
I have never painted one of these, so once I knew it would fit in the army I could not resist laying down some color last night. I really should have gotten some sleep, since I painted areas that are never going to be seen, but here they are regardless. I used a gull grey enamel paint, followed by chardon granite and bolt gun metal sponge chipping. Once dry I let a wash of blazing orange run into the crevices. I painted the screens and a few other bits, but am not even sure what is visible.
Overall I wanted a dark grey/blue interior in order to contrast with the bone white with green highlights exterior. The inside will have the most battle damage, with the exception of hatches and the bottom edge of the tank. Will it look weird to have more damage inside than out?
Posted by John Stiening at 7:14 AM