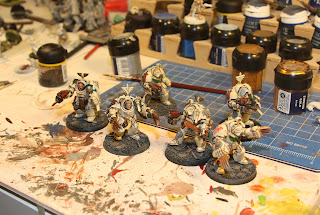 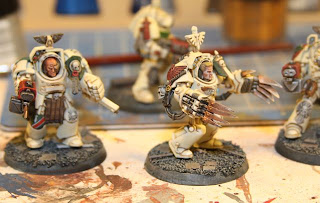 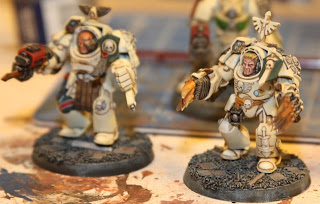 I have just finished Belial, the Captain of the Deathwing. Compared to some of the other terminators he is a little bland. I am considering painting his right leg green, and then adding a larger version of the red over green stripe heraldry as seen on the trooper to the left of him. Overall I am very happy with how the deathwing is turning out, and am looking forward to the final 5 guys being don so I can just lavish details on them. I am convinced that the black bases are the way to go since they provide the most contrast. Maybe I should raise Belial's base up a bit, or add more ruined detail. So far his only distinguishing characteristics are his chaos lord lightening claws.
I have not even constructed the Ravenwing part of the force yet.
My Imperial Guard army is not forgotten, even though I have loads of bikes and speeders to paint. I finally picked up a box of Catachans, so they will be represented in the force. I am really tempted to paint them up with orange jump suits and give them prison numbers.
Posted by John Stiening at 6:43 PM