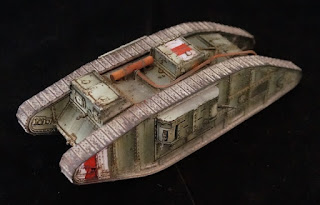 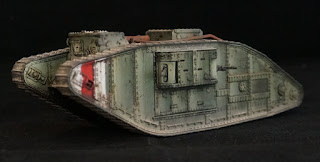 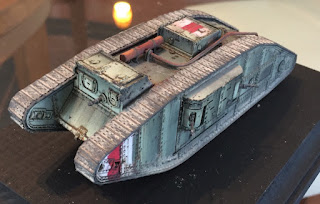 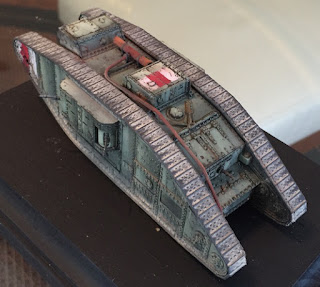 Richard over at Warpstone Pile painted a really nice A7V German tank for NOVA(which has been subsequently saved from lacquer frosting). I figured that since I had a Trenchworx Mark IV sitting in my closet that I might as well paint it up to provide his tank some company.

There are many nice features to this model, including magnets included for easy weapon sponson swaps, but there were also significant mold registration issues. The tracks and machine guns on this tank suffer from what looks like a mold mold slip. Regardless, I enjoyed painting the model and decided that I would not cover the bad tracks with mud as would be my standard approach to correcting poor tracks. I think the tracks are important on the vehicle, and despite flaws in the kit, these style tracks form the basis for what Games Workshop would eventually use for their archaic-future aesthetic.

So this is not a Renault, but it is from the great war. Bonus points for that?
Posted by John Stiening at 11:50 AM