To Buy Or Not To Buy...A Metal Thunderhawk 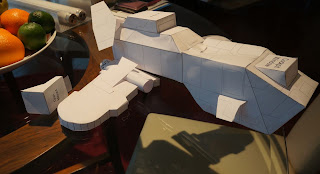 I've wanted to build/buy/ebay acquire, a space marine thunderhawk for some time. When a metal thunder hawk came up on ebay I considered the purchase. I remember really liking the model, but as the all metal hobbyist torture kit on ebay was not built, it was hard to see what the final model would look like. There are so few photos of these things around, they might as well be white whales. Rather than plunk down enough money to buy a forgeworld resin thunderhawk on an unknown ancient metal quantity, I decided to take some plans I found online to make the original one, and see how it would look in my collection.

Good thing I did.

I have no idea why I thought the metal one was cool. It is not. The forgeworld thunderhawks are so much better it is not even worth collecting the metal one. (unless you are into hobby torture...in that case all yours!)

Does anyone like the old model? Outside of the marine gunners in the wing tips, there is not much I like about it.  I would not buy an RTBO1 Beaky marine either, so maybe there is a limit to the nostalgia.
Posted by John Stiening at 4:28 PM