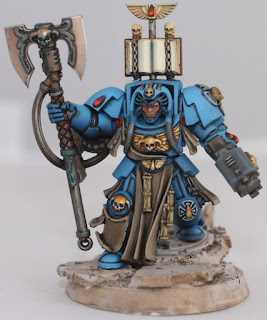 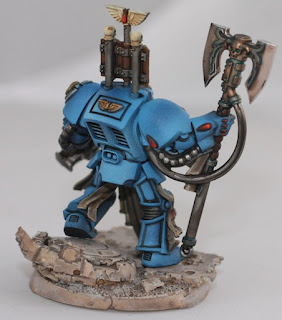 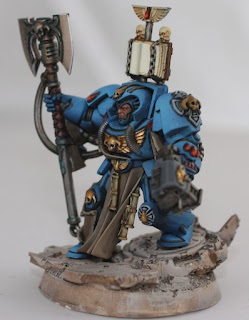 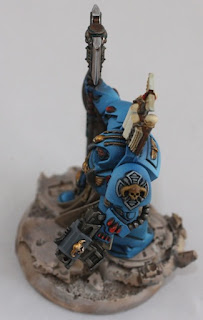 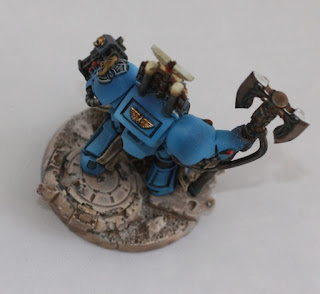 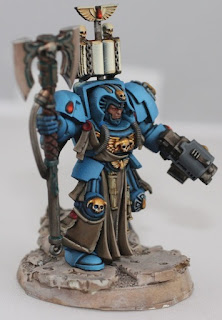 After having so much fun painting the BA dread and the jump pack Sergeant, I thought I would take a stab at one of the the Space Hulk miniatures. This guy will either lead the Land Raider assault, or the Storm Raven assault (picked up a Storm Raven last night!). I used a lot of air brushing on this guy, which I am really proud of. The base is one of the resin bases, I have been tinkering with, and works well with the pose this guy comes in. I have a red micro-pen which I plant to use to mark up the prayer sheet on his leg, and on his magical tome. I would like to make the marking look like cuneiform, but so far my practice markings have not worked out very well. I have the FW BA transfers, but I need to wait until I have some gloss varnish before I try them again. I mucked up part of the libby dread and I don't want a repeat of that. (I used microsol and microset, but they still went on poorly)
When I went to the GW store yesterday I spent some time looking at the Armies on Parade contest. I really want to participate in it, but have never made an army display board. June 25th seems kind of close if I want to really lavish time on the Army. If I want to take BA, then I will have to completely redo my army with my new style. I was thinking though that a lessor known chapter might make a bigger splash.
Color Schemes for Marines (BA,DA or just turned Chaos)
Units I would like to include:
Settings:
Just some ideas.... How much of a diorama is needed on these boards? Does anyone know? Should I repaint my Squat army instead?
Posted by John Stiening at 11:23 AM