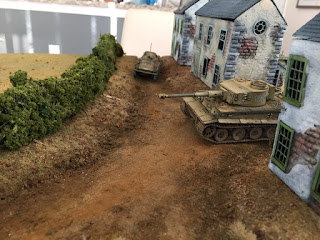 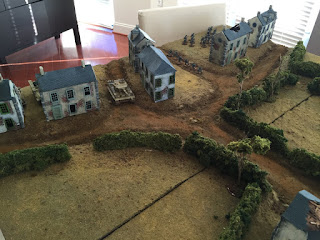 The table setup for a 28mm game. All of the terrain is scratch built. 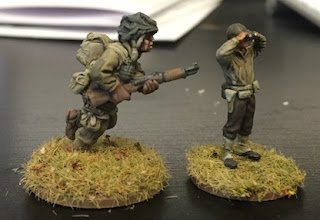 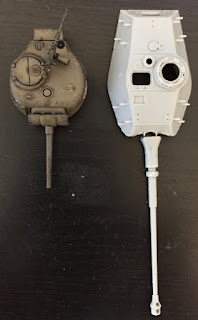 I played my first game on the new table last Saturday against Owen's Russian forces. I was committed to using both the Tiger tank and Puma armored car and consequently faced down two T34 tanks and bucket loads of soviet infantry. It was a lot of fun to finally play on the table, and more photos of the battle are coming.

Take a look at the Sherman turret next to that King Tiger turret. I know which one I think wins in a fight. On the bright side, the German tanks were poorly welded due to difficulties in the manufacturing process. This meant that an allied shots that would not normally be able to penetrate the King Tiger's armor could still cause spalling on the interior. Basically the welds came apart and shot through the interior,  damaging the vehicle and potentially killing the crew. We'll see how well this big cat does against a full Sherman platoon in an upcoming game. Even five on one it doesn't seem fair.
Posted by John Stiening at 3:11 PM