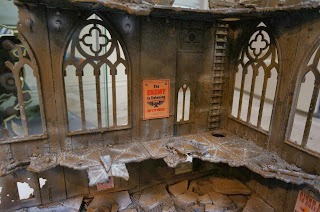 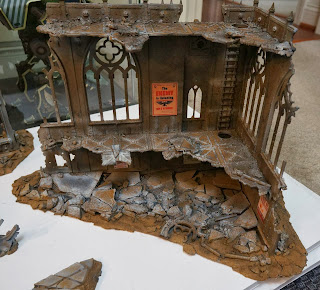 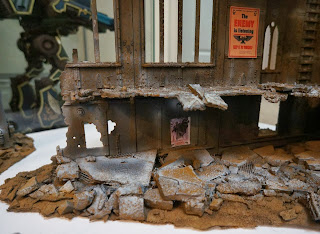 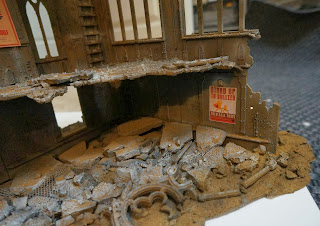 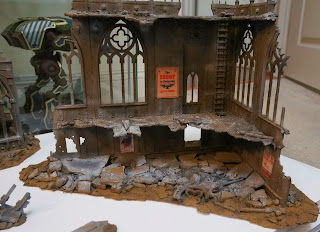 One of the things I always wanted to do was detail the interior of buildings differently than the exterior. Broken bits of furniture, ammo crates, and propaganda posters. While waiting for one of my new molds to cure, I decided to hunt down some suitable posters for the inside of the shrine of the aquilla. I found this post on Bell of Lost Souls, and found the ones you see here.  Then I went on over the Recalcitrant Daze and found some even better sets that he had put together.  What I need to find now are some coffee cups to set on one of the ammo crates. At the moment I am hunting for suitable maps that I can print out. I imagine in a world as devastated as the one I am creating, the local PDF would have had communications severely compromised.

I think it would be interesting to work some LEDs into the mix. I was thinking about adding a little scene with a generator and signaling light or sensor suite.

All this prep work is making me really excited for the next Armies on Parade.

A worn out mattress pushed up in the corner of the building. That is what this model needs.

I decided to build a plinth for one of the statues. This gives me a really nice place to put candles, and posters, and will act like a center piece for the board. It is still drying, but should be painted up and weathered tomorrow. I'll take a better photo later. I just wanted to show a quick preview. The exposed brick came out really nicely, and makes an otherwise boring block a bit more interesting. It was easy enough to do that I may try this with a building. 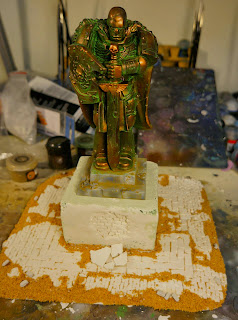 Posted by John Stiening at 6:18 PM