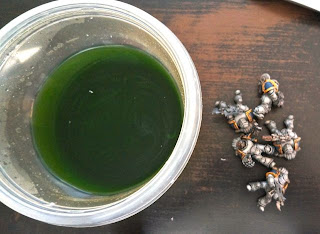 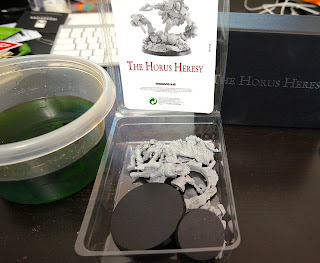 My Astral Claws finally took the big plunge prior to my wife and I going on vacation. After a whole week of soaking in Simple Green I scrubbed the models and they came out sort of chalky, leaving rough white patchy primer residue. Is there a better way to remove paint and primer from resin? Does white primer just behave this way? I normally prime with black, which does not funk up the surface when dunked.

Now that these guys are cleanish, they can john their boss/ex-boss shown in the photo above. The rough texture may end up adding some interesting detail to the models. Angron is going to be fun to paint, though I think his victims present more painting fun. I love the fact that I get to paint a few legions at once. Speaking of that, anyone besides me notice that my minty colored necrons are dead ringers for sons of horus? Vallejo paint is the way to go with SoH!

I feel lucky that my saturday quandry is whether to paint my PH force as Emperor's Children or as Ultramarines. There are so many decisions that really matter, having one that doesn't is nice. Have a great saturday before the storm everyone!
Posted by John Stiening at 6:45 AM