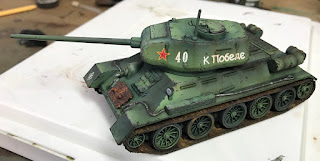 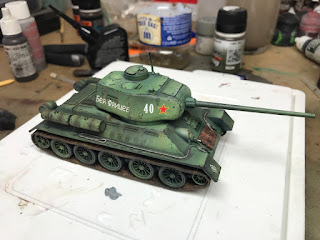 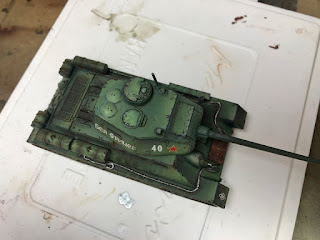 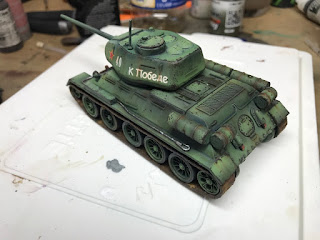 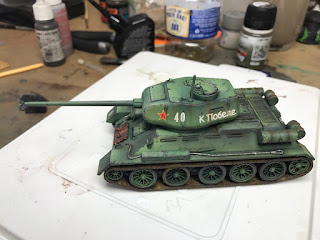 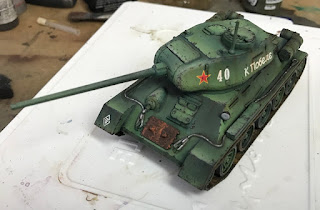 A couple years ago I painted a pair of T34 tanks for Owen's and my birthdays. The tanks started out identical, but after picking up a Trenchworx tank for Bolt Action, and being inspired by another friend's Konflict '47 force, I figured it was time to retrieve the tank from the bottom of a box and see what I could do to update it.

In terms of painting, the tank had a fairly solid foundation. Panel highlighting, pin washes, and color modulation all worked very well on it. However as a monotone tank, it suffered a little in the visual interest category. It also looked a bit too much like a toy.

The first thing I addressed was a lack of paint chipping. Using a sponge and a brush I was able to chip up the model in under an hour. This broke up the harsh transitions and helped tie the tank together.

I next worked some more colors into the model. I used blue, red, grey, and buff oils and worked them into the surfaces adding different tones wherever needed. Blue was added to shadow areas, buff to highlight areas, and red and grey used to streak down the sides of the tank. I finished this process up by adding oil stains on the barrels and to either side of those vents behind the turret.

With oils completed, I really saw the model. I was not pleased by the kit, but there are other problems all my own doing. There are some awful looking construction issues where the top half and bottom half of the turret join together. There are visible seems on the gas canisters on back. The antenna is as thick as the mg, and comically short. (Why did I even put it on in the first place?). To solve these problems I need to do some surgery. I think I need to:

1) cut off that wonky antenna and replace it with a brush bristle
2) use weathering powders on the oil canisters to hide the seams
3) drill out the weapon barrels.
4) fix the turret seams using.....magic?

Number 4 is where I could use some help. I'm just not sure what the right path for correcting the seams is. Should I just find a bunch of junk to glue to the turret and cover up the problem? Do I just ignore the problem? Any suggestions would help.
Posted by John Stiening at 1:49 PM